Skip to content
Sunday saw the first round of the 2018 pairs competition on Osprey and Teddie Boy out of Minehead. Following a very nice full English breakfast in the harbour café, we were away from the harbour at 11.45am. It was great to catch up with the guys we hadn`t seen since the last competition.
Flat calm sea and glorious sunshine kicked the day off nicely with both boats steaming down the channel to Porlock Bay.

We started in fairly close on Osprey, looking for the poor cod, pout and small huss that are usually present closer to the shoreline. Unfortunately, they didn`t want to come out to play and had it not been for the dogfish taking most baits every chuck it would have been a very quiet start to the match.

Tom Fitzpatrick picked up some huss on his first few casts followed by a very welcome codling.
Ivy Stone was our next move and again nothing showing apart from dogs.
We spent the day trying different marks and fair play to Steve Webber he worked hard to try and find the better stamp of fish that have been showing in the channel recently.
Again Tom could do no wrong, picking up poor cod and Pollack to put us all to shame.
After listening to 8 hrs of Phil`s tails of his recent trip to Panama, his motocross career, and catching enough dogs to fill a bath, it was time to steam home.

On Osprey, only 6 species caught on the day, codling, conger, huss, dogs, poor cod and pollack, with Tom and Rick Crosby taking five each, and splitting pool money for most species. Steve Lodge took pool for heaviest fish with a huss of 7lb 2oz.

Teddie Boy also went straight down to Porlock Bay and started just off Bossington Beach looking for the small fish to get some figures on the score sheets but apart from John Mays 8lb Bull Huss (taken on lugworm) there were just a couple of doggies boated.

A couple of moves later, as we moved further down the coast, a couple of poor cod and pout were taken by Malcolm and a small conger by Nathan with just doggies to most.  A couple of Pollack fell to Terry and Pete and John May picked up a nice rockling.
Moving off at slack provided the best two fish of the day, Tony Summerton had a good scrap with a PB tope of 23lbs on a small worm/mackerel bait, we were not sure at times who was going to win the tussle, but in the end it was in the boat!
Craig quickly dropped a “proper” tope bait over and was rewarded with another tope of 31lbs-4oz [by formula] – tantalisingly close to specimen size.

For the day on Teddie Boy we had 6 species, with Malcolm and John sharing the species pool with 4 species each. The heaviest fish pool went to Craigs Tope.
Roll on our next competition in June, and hopefully a few more species will have arrived. 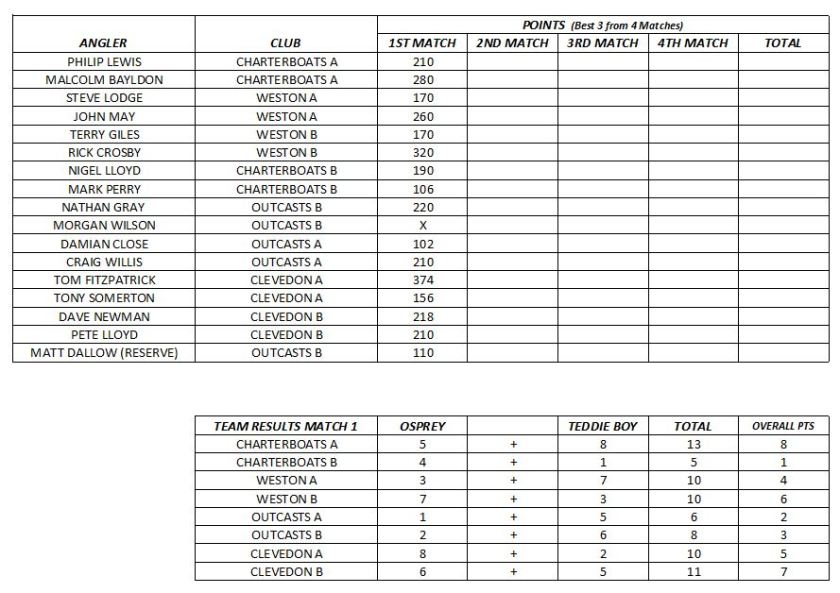